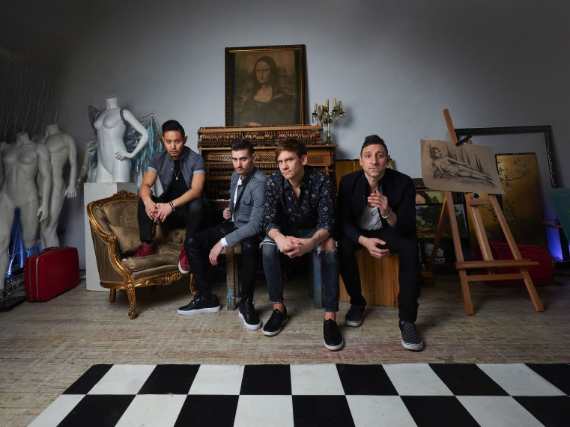 A compelling state-of-the art indie pop band with an eclectic New York City sound. Don't Believe in Ghosts, led by singer/producer and writer Steven Nathan, rose from his home studio in 2017. The band is rounded out by Dan DelVecchio on Guitar, Alex Goumas on Bass, and Ken Yang on Drums.

The bands’ achievements include song features on many TV shows including ‘Ink Master’ and The U.S. OPEN. Don’t believe In Ghosts teamed up with 8-time Grammy-winning mixer Ken Lewis for their single ‘Don’t Wake Me Up’. The song's video featured famed comedic actor Gilbert Gottfried. ‘Don’t Wake Me Up’ earned more than one million retail and radio plays. In 2019 Don’t Believe In Ghosts sold out their first headlining show at New York City's Bowery Ballroom. In the summer of 2019, the band embarked on their first U.S. tour.

“Don’t give energy to the ghosts of your past.” Says Steven Nathan when describing the meaning behind the bands' name. “Worrying about what other people may think can be draining and debilitating.” Don’t Believe In Ghosts amplifies this theme throughout their music.

'Living Like This', the band's latest single will be released on Feb 21st. People who pre-save will get instant access to another brand new song called ‘Grown Up’.  “Everyone is trying to present these exciting versions of themselves, which we all know are not real. Yet, we sometimes feel compelled to compete. This mindset is very distracting" Nathan says describing the lyrics to ‘Living Like This’.