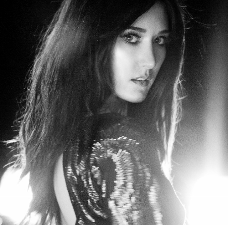 “I prefer to create friction,” post-country chanteuse Aubrie Sellers offers. “Because if you’re not pushing buttons, you’re just making something pleasant, it’s probably been done before... and it’s not making anyone feel anything.”

In this world of pretty little girls who are seen and not heard and reality stars who are famous for nothing, the 24 year old songwriter ain’t buying in. Laughing, she continues, “I’d rather my music be polarizing than everyone like it, because they rarely do. I think passion is a lot deeper than that. I want to go deeper, and be honest that life isn’t just some party and going out. I mean, don’t people feel anything?”

Not that New City Blues is some kind of morbid, maudlin affair. From the cutlery in the blender indictment of surface beauty “Paper Doll” to the Lone Star drive of “Just To Be With You” and the tumbledown melody of “Sit Here and Cry,” this is a high energy box cutter of emotion: 14 songs marked by the bite and punch of smart girls who know there’s more to life than a cold beer and cut-offs.

“I tell people there’s not a lot of happy songs,” the Texas/Nashville hybrid cautions. “But they’re not unhappy songs, either. It’s life... the way it is, and what’s wrong with that?”

There’s a definite viscerality to New City Blues. From the yearning title track to the slow-building “Loveless Rolling Stone,” the sense of displacement marking so many young people uncertain about the future tempers the pools of guitar lines, the way her voice has just the slightest ache when she finds a note’s center.

“My influences are all over the place: the Kinks, Screaming Jay Hawkins, Buddy and Julie Miller, Creedence, even Ricky Skaggs. Patty Griffin, Neil Young and Bob Dylan, some acoustic things. Led Zeppelin is my biggest rock influence – and that goes right straight, for me, to Ralph Stanley. That raw bluegrass, the banjo, that’s the same energy and intensity you get in punk.

To try to put a label on Sellers’ sound is tricky. If there’s a slight drawl when she sings, it’s where she comes from. But the sound – “I love trashy drums and telecaster guitars, but then that dreamy atmospheric Daniel Lanois kind of effect” – has an immediacy and an urgency, as well as a porous jagged edge that could only be described as “garage country.”

“It’s so much more like more garage rock, that raw raging stuff. It’s Ryan Adams and Dwight Yoakam, who are merciless and just keep coming – even when they’re quiet. So that fits... in a weird way. It’s better than anything else I can call it.”

And never underestimate how important melody is to the woman raised on the road with her mother critically acclaimed progressive traditionalist Lee Ann Womack. “The kinds of melodies I’m drawn to I don’t see coming from anywhere else. The feeling under a song comes from the notes and how they move from one to another; that’s the real essence of a song. That’s why I like a lot of bluegrass and Robert Johnson, the melody tells you as much as the words do.”

Sellers was basted in music before she was even born. Her father Jason Sellers, now a top songwriter, was on the road with Ricky Skaggs, then had his own solo deal. The Grammy-winning Womack is a singer’s singer, who’s performed with or for Willie Nelson, Buddy Miller, the Fairfield Four, Steve Earle and Maya Angelou.

“All my memories are sitting on the bus, listening to my Mom play and sing. Always being on the way to somewhere else... and I loved it.”

The rootlessness comes honest. As does a perspective that in some ways outstrips her years. “The way I grew up, I look at certain situations differently, see how motivations change. I didn’t love seeing how people behaved when my Mom was in a room and how they behaved when she wasn’t but it gave me perspective.”

It also taught the dark-haired introspective the importance of holding the music above all else. Though she’d written since she was young, “I didn’t consider myself a songwriter ‘til I started writing for this album. Then I couldn’t imagine not writing all my songs. When you’ve been playing your whole life, you want to know the songs are as true as you can make them. Who’s truer to my life than me?”

Certainly no one has a take like Miss Aubrie Sellers. From the pointed impaling of sensationalism of “Magazines” to the emergence from petty backstabbing of the meandering “People Talking,” the whirling reality check “Living Is Killing Me” to the lothario-slashing noir “Liar Liar,” there’s no flinching or apologies given. Instead the record thrashes, lurches and exorcises much of what she finds annoying.

“That’s how it really feels: that frustration, that jagged, raucous stuff…I mean, when you see all this stuff around you – hypocrisy, insincerity, vanity for vanity’s sake. You can own it and laugh, or buy in and I’m just…not…buying…in.”

“We are all looking for the same kinds of things,” she concedes. “But I feel disconnected a lot from people my age, whether it’s the lack of direction or focus…or the idea the goal is to be famous, not for something, but just famous.

“Is the party culture as good as it gets? That’s what we’re supposed to want? Really? This hyper-extroversion is almost it’s own pathology. And if you’re not that, it’s not okay? I think it’s okay to be a thinker, to be quiet and explore things like music, books, conversations. When you’re like that, it makes the songs richer, really, and not so all-the-same.

“There’s that line ‘Are you here to stay? Where’d you get those shoes? Why you walking around with new city blues?’ that says it all for me. It’s why I called the album New City Blues. For me it encompasses a perpetual feeling of loneliness, and of not fitting in…feeling like everyone’s always looking and judging and feeling insecure.

“But I also liked it as a title because I felt it reflects the subject matter on this record, the same kind of “blues” people have always sung about, just in a new way, and with a new sound. Most of the songs have those dark undertones, so it seemed honest and appropriate.”

And real. If the world according to Aubrie Lee Sellers isn’t party 24/7, there’s time to ponder, to reflect, to fall in love instead of lust and to experience the glorious pain of heartbreak before moving on. World-wise, she knows the score – and isn’t afraid to speak the truth; but she’s young enough to still have hope tempered with a wicked wit and true discernment. Maybe that’s the best news of all.